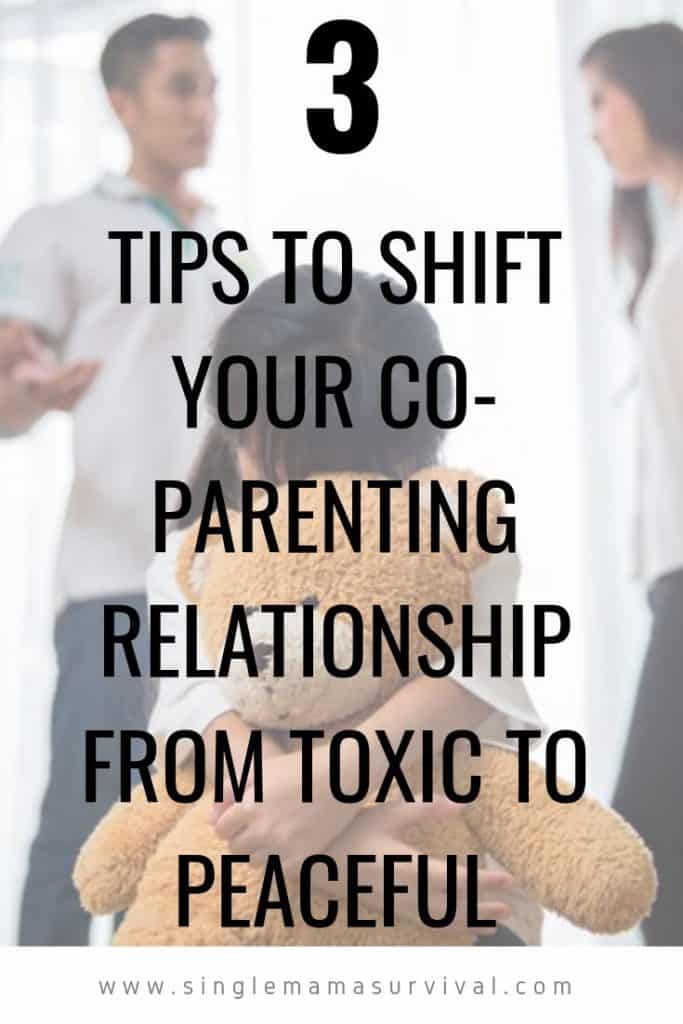 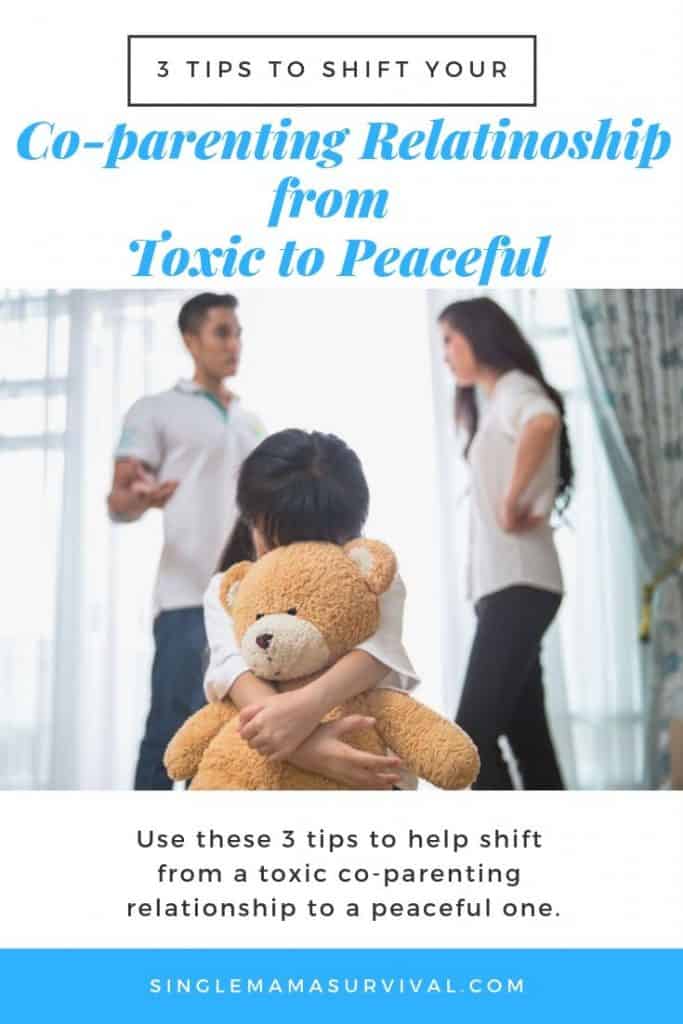 Today I want to introduce you to 2 moms who are rocking this co-parenting thing. They are Erin and Tina Gipford- mom and step mom- who have walked the trial of raising children in a blended family.

It’s hard enough to raise your children with your ex- but to also raise them with your ex’s new wife? That can be really difficult. This family, together, decided that the most important thing was happy children.

Erin and Tina want to share, through their own story, how co-parenting can be peaceful. I’m so excited that they’ve agree to write the following guest post to share 3 tips to shift your co-parenting relationship from toxic to peaceful.

We are a participant in the Amazon Services LLC Associates Program, an affiliate advertising program designed to provide a means for us to earn fees by linking to Amazon.com and affiliated sites.

(Also be sure to check out their book to learn how they navigated divorce, remarriage & co-parenting) 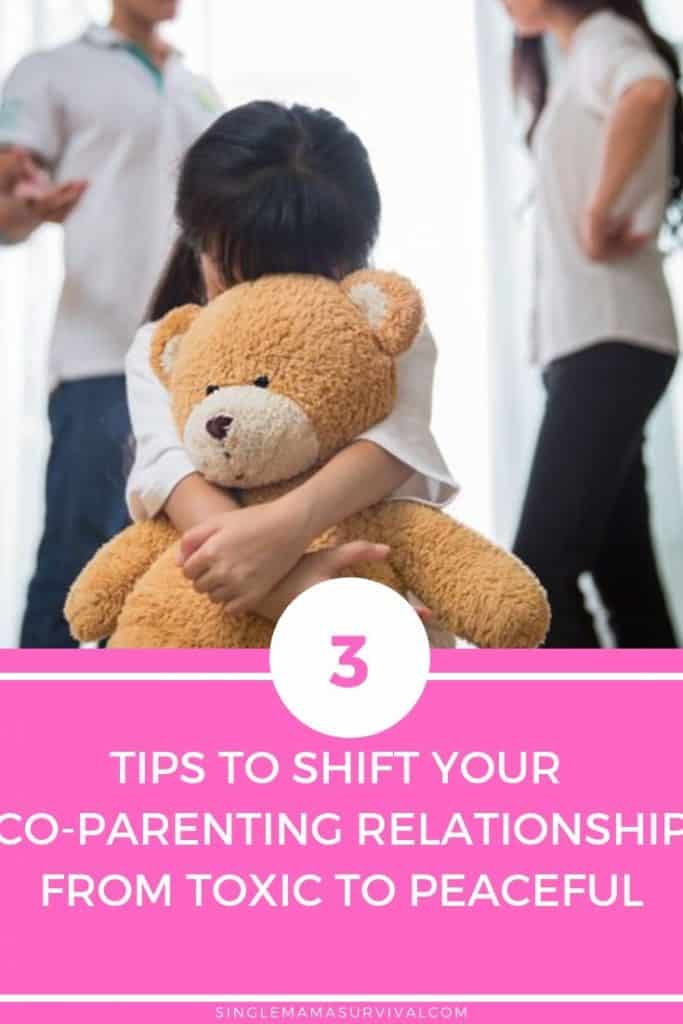 Let’s be honest. How often do you hear the words “peaceful” and “co-parenting” used in the same sentence? Unfortunately, probably almost never. It seems that a peaceful co-parenting relationship seems to be elusive and hard to obtain but is also extremely valuable to most co-parents and stepparents.

We did not start out peaceful. We started out with a lot of resentment and mistrust. I have learned over the past 13 years how to shift my perspective in order to build a positive co-parenting relationship with my ex-husband and his wife. I hope that by sharing things that I’ve learned along the way, it will help anyone who is struggling.

Disclaimer: These shifts are not a “quick fix”, nor will they seem easy or natural right away. They are meant to be referred back to again and again… and again. Print them out and hang them on your refrigerator. Reference them whenever you are faced with a not-so-fun co-parenting decision or situation. They will help remind you to focus on the big picture – a peaceful co-parenting relationship.

Tip #1: Learn how to show respect your co-parent (even if you think they don’t deserve it).

I know what you are thinking, “He or she doesn’t deserve my respect!”. Well, no, maybe they don’t. But, you have created a little human together and they deserve it. Everytime we disrespect our child’s “other parents” (stepparents included), we are indirectly disrespecting our children. It’s easy to think they don’t hear it or see but let me assure you, they do. And when they do, they will automatically blame themselves in some way shape or form.

Respect can take many forms in a co-parenting relationship. Here are just a few common examples that I can remember from my own experience.

However, the key for us is that we both know that ultimately, the other person will respect our decision either way. Whether it’s my time to give, or his, we both understand that a “no” answer is possible and we do not hold it against the other parent if they, for whatever reason, choose to decline the request.

We also do not keep score. Meaning, just because I allowed him to take the kids for a special occasion on my weekend, I do not in any way expect him to let me do the same. If he agrees to switch around time, GREAT.  But if he doesn’t? I respect that also. It’s his time, not mine, and there’s a legal document to prove it.  I would not want him to demand or expect favors of me, so I do not demand or expect favors of him.

Let’s face it, we are ALL human and we ALL have emotions that bubble up. Especially, when it comes to divorce. I remember feeling the complete spectrum of negative emotions throughout the first 2 years after my divorce. Hate, resentment, loneliness, guilt, shame… just to name a few.

Luckily, I was able to recognize that these emotions, although completely valid, were not going to serve my co-parenting relationship whatsoever. I quickly realized that if I let my emotions call the shots from here on out, I, along with my children were headed for a rocky road.

Instead, I learned how to acknowledge and validate these emotions as soon as they appeared by taking a few moments to just sit with them and really dig down to the root cause. This in turn allowed me to quickly shift back into my normal logical frame of mind. It allowed me to be choose respect instead of spite.  If I would have tried making major decisions with my ex regarding my children’s lives when my emotions were roaring, I would have been gambling with their future happiness. It’s OK and completely normal to feel whatever you are feeling at any given moment but, ideally, your children, nor the other parent(s) should suffer because of it.

Tip #3: Realize that the only person you have control over is YOU.

This one, is literally a co-parenting game changer! For some reason I used to seem to think that I have some sort of magical control over my ex-husband’s decisions, actions and well, overall existence.  I used to spend hours with my mom, sister or girlfriends venting and complaining about every little thing that (in hindsight) was out of my control completely.

“He never puts them to bed on time, I should tell him that 8:00 is their bedtime.”

“I can’t believe he gives them a gift every time he picks them up! That’s so manipulating, I should put a stop to that.”

“I can’t believe he has a new girlfriend already. She is definitely not allowed to be around my kids.”

Do any of these sound familiar? These are just a few of the ways I used to try to control my ex husband. I’ll let you in on a little secret that will save you lots of time and heartache…

TRYING TO CONTROL ANOTHER PERSON’S ACTIONS DOESN’T WORK.  Not even a little. The only thing it did do was drive our co-parenting relationship farther and farther into the mud.

It finally came down to reminding myself on a daily (sometimes hourly) basis that unless my kids were being put in immediate physical danger, I really had no say in what he did or didn’t do.  It wasn’t up to me to tell him what to do or not to do. Just because I didn’t agree with some of his decisions, ultimately I learned, that it didn’t matter. I had to force myself to adopt the ever so popular motto: You do you and I’ll do me.

It was co-parenting life saver!  What’s even more amazing is that once I fully adopted and practiced this new mindset, eventually it rubbed off on him and he did the same.  We both kept our eyes on our own bobbers and viola, life was peaceful again.

So the kids don’t go to bed at the same time at his house, OH WELL. At least they go to bed at some point. If they don’t get enough sleep and are crabby, he’s the one that has to deal with that. His choice, not mine.

So he buys them gifts all the time, OH WELL. It could be worse, he could be the type of dad that doesn’t even pick up his kids. I’d rather they get showered with gifts. I can’t afford to do that but I know they love me anyway.

So he has a new girlfriend already, OH WELL. Maybe she will make him happy. Everyone deserves to be happy.

Thank you Erin and Tina for this helpful advice on coparenting! Be sure to check out their book, (Step)Mom: A Dual Memoir, to learn even more about successful co-parenting.

Previous Post: « Use these 10 Time Saving Tips to Make the Most of a Busy Day
Next Post: How to Create a Co-Parenting Agreement »

This site uses Akismet to reduce spam. Learn how your comment data is processed.

Stay up to date

Why does January last SO long? . . . #singlemomlif

That’s my story and I’m sticking to it. What a

There is no doubt that hardships change us. Part o

This is my friendly PSA for the New Year. Tag a fr

Perfect quote for a new decade and a new year! . .

Hoping your Christmas season is peaceful and joyfu

That’s my story and I’m sticking to it. What a

There is no doubt that hardships change us. Part o

This is my friendly PSA for the New Year. Tag a fr

Perfect quote for a new decade and a new year! . .

Hoping your Christmas season is peaceful and joyfu

Just remember, sometimes that person is not a boyf

I feel the storm most during the holiday season. H